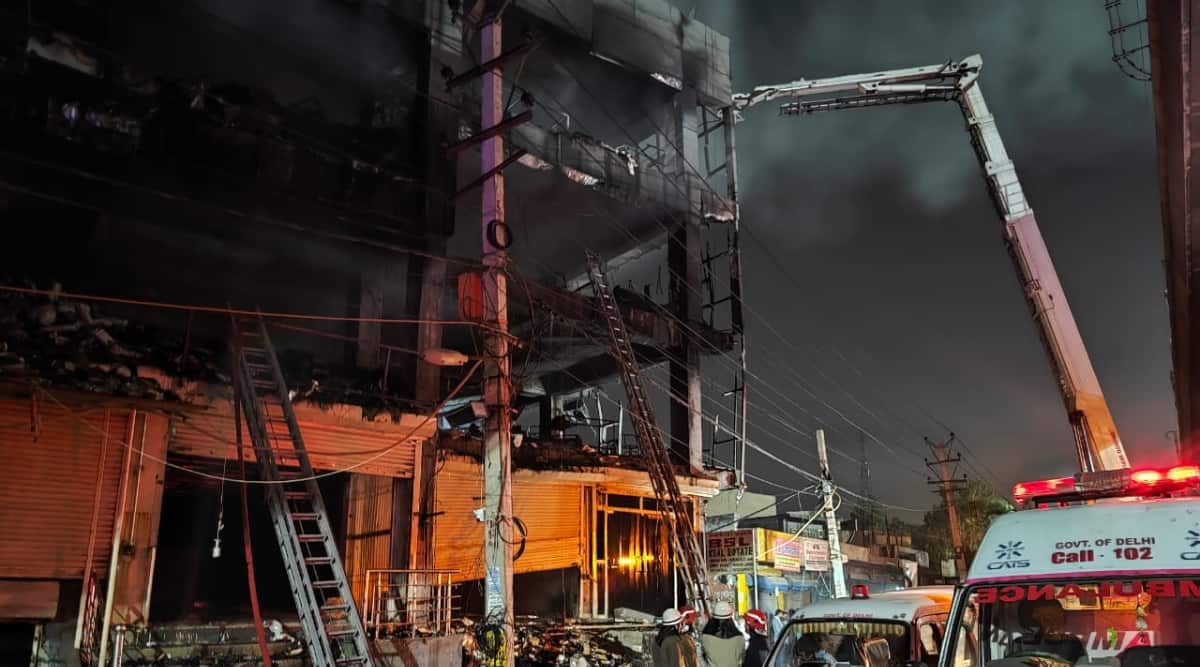 Trapped in a room stuffed with smoke. That’s the haunting reminiscence many survivors recalled a day after the Mundka fire.

From utilizing tables to interrupt window panes to fashioning makeshift ropes, many mentioned it was a miracle they survived.

They recalled they first began to panic when electrical energy within the constructing was cut-off, and as individuals tried to make their means downstairs from the one exit, they seen smoke coming from the underside.

“The fire had spread to the upper floor, where over 100-125 people had gathered for a motivational seminar. There was total chaos. We couldn’t see much due to the smoke. It was difficult to breathe. The first instinct was to break window panes using the table and try to jump to safety. Some locals arranged for a rope and a JCB from a nearby crane market. Jo nikal paaya, woh bach gya,” mentioned Manish Lakra, a technician working within the CCTV and WiFi meeting unit. Lakra suffered accidents on each fingers as he jumped from the primary ground after grappling down a rope.

Preeti’s (19) fingers had been additionally burnt whereas escaping the constructing: “Some tried to take the only exit from the staircase, but returned as fire had spread. Some people started crying and made frantic phone calls to families and the police and fire department. Someone yelled, ‘I am going to die’. We tried breaking the glass windows but it was not easy. It took 10 minutes. Others, in panic, tried to remove an AC to find an opening to escape.”

Many, although, couldn’t make it out. “There is a certain guilt… that I could not help others. We do not even know if they made it out alive. We are constantly checking media reports to find out who all died,” mentioned Priyanka.

Some survivors mentioned the fireplace tenders arrived late. “We had been calling fire and police departments since 3.30 pm, but help arrived by 5 pm,” mentioned Saahil Prajapati, 23, the inventory supervisor, who was among the many first to be rescued. “I lost count of how many people we rescued with the help of locals. Many died in front of me. I am still trying to process the tragedy.”

Atul Garg, the Delhi Fire Services chief, denied the allegations, saying hearth companies obtained a name at 4.40 pm and the primary hearth tender reached at 4.50 pm. “There was no delay in the firefighting operation. We reached as soon as we could. Seeing the situation, we sent more fire tenders but they arrived late because of the traffic.”

Outside the constructing on Saturday, many survivors stood anxiously on a street divider for hours, as NDRF and firefighters continued search operations. Colleagues enquired about their associates from officers and locals.

“Mona tu nikal gayi (Mona, you got out),” mentioned Ritika, as quickly as she noticed her colleague. Both embraced one another earlier than breaking down. “Drishti nahi nikal paayi aur Sonal ka kuch nahi pata (Drishti could not escape and Sonal is missing),” Mona mentioned. Drishti was among the many lifeless who was recognized on Saturday.

Three girls – Ayesha (24), Kajal (19) and Banwati (18) – from Bhagya Vihar, all of whom suffered accidents on legs and arms, waded by means of the chaos, repeatedly asking locals for assist in figuring out their colleagues and relations.

Ayesha mentioned, “My niece Mahi is missing. Her parents are making rounds of hospitals and mortuaries to find her. I came here in hope.”

Kajal mentioned, “My three school friends, who worked with me, are nowhere to be found. I saw they were stuck as I was climbing down a rope to escape.”

Poonam mentioned that she had taken two days depart as she was feeling unwell. “I was lucky to survive, but one of my relatives, Yashoda, is missing. She was in the seminar. My family saw the news and assumed that I was also stuck in the building,” she mentioned.

Survivors mentioned that locals additionally organized for a crane, a makeshift rope, some ladders, and a mattress to assist individuals make their means down. “If not for their assistance, the death toll could have been higher,” mentioned Prajapati.